Don't Mind! This site uses cookies and by using the site you are consenting to this. Find out why we are using cookies here >.

Two British men have become the world's youngest to row across the Atlantic Ocean.

Tom Rainey and Lawrence Walters, both aged 23, left New York on 3 May in their boat Yves, bound for the UK.

They landed in Salcombe, Devon, after rowing for about 3,800 miles and were welcomed by hundreds of well-wishers.

Team Ocean Valour is raising funds for the Brain Tumour Charity, in memory of Mr Rainey's father who died from the disease.

The pair, who survived capsizes and huge waves, also set an unexpected world record on route after they rowed 112.5 nautical miles (129 miles) in 24 hours at the end of May, breaking the record by nearly 10 nautical miles.

The first thing they did after they got out of the boat was to eat a bacon sandwich. Their on-board food would have run out on Wednesday, 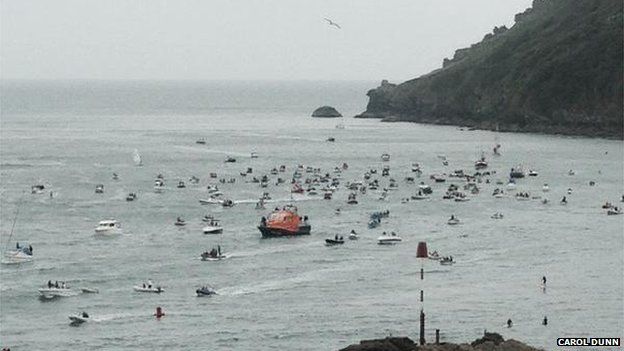 Mr Walters, from Hampshire, said the sandwich and a cup of tea was "all I had been dreaming of".

Mr Rainey, from Devon, said it was "scary the first time" the boat capsized but the pair then "got used to it".

They said everyday they thought they would not make it home and it was "so hard to fathom that we would actually get here".

Mr Rainey's mother Anne, said: "Words won't tell you how overjoyed I am. They deserve all the recognition."

Both records have been confirmed by the Ocean Rowing Society.

Captain Morgan's in the heart of Salcombe has recently been lovingly refurbished. It looks great. They've recently updated their menu too serving traditional cooked breakfast in the morning, with sandwiches, pasties and pies in the afternoon.

Well worth a visit if you can. Fore Street, Salcombe, TQ8 8ET

Win a night at The Anchor Inn

The Anchor Inn are offering a night's stay in the gorgeous bed & breakfast in Devon. It's simple to enter. Just find their competition post at the top of their facebook page and simply like and share it.